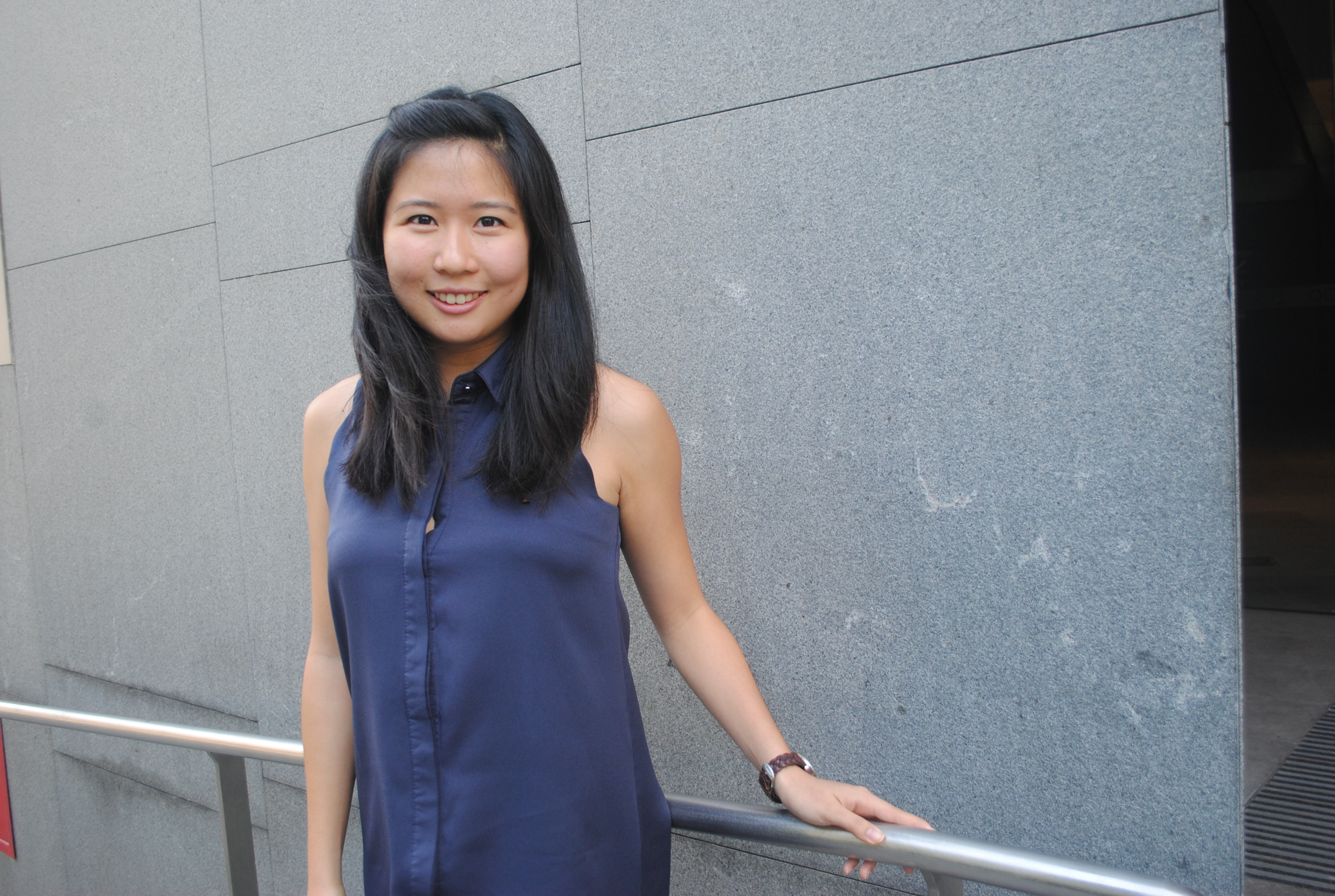 Went poking around random corners of the island with @explorersingapore for today’s story on people living the outdoor life. Indeed there are still parts of Singapore that are rambling and rarely-touched, scream-and-no-one-can-hear-you kinda isolated, the kind of quiet we go abroad to seek. Sometimes when I get tired of reporting on these fledging travel bubbles that never seem to take off, I remind myself how lucky I am that work brings a stream of new experiences. Now can we please WFH forever?😌
This time last Friday at the coolest new spot in the East. I usually find the #iykyk hashtag super act-exclusive and annoying HAHA but how to resist when a place calls itself @secretpizzaclubsg?! 🙃🍕
Behind the scenes on my first Home in Focus shoot, where I sat like patience on a monument as a test subject for lighting and even candid shots by @dreamygin turned out so cinematic.
People our age making babies but @deansmole and I just making baby scobys 🙃 Hit us up for homemade kombucha, fresh and tart and zingy✨@cat.boocha
2020 was a bad year for reading, I aimed for 30 books and only hit 20, despite (or perhaps because of) the damned circuit breaker where I spent all my potentially-productive commute time scrolling IG and playing TF2 (LOL). Set my Goodreads goal at 30 again this year but spent January in a stop-start-stalling situation where I didn’t even finish my first book in time for Book Club last month 🤪🤦🏻‍♀️
Staring down at least a year without travel but mornings like these make me feel like we’ll get there 🌿
Follow To travels and trunks on WordPress.com

After making it halfway up Poon Hill, our ascent to the summit starts at 0500h, and it will take us an hour’s climb to make it up by sunrise. It is still pitch black when we step out of the teahouse, and the climb starts immediately. We climb in single file – Shuhui leads the way with a torch and I tread carefully behind, trying to keep my footsteps in the rays of light that spill out of her shadow. Delhi, who has made this climb hundreds of times, brings up the rear with a headlamp he has wisely thought to pack. 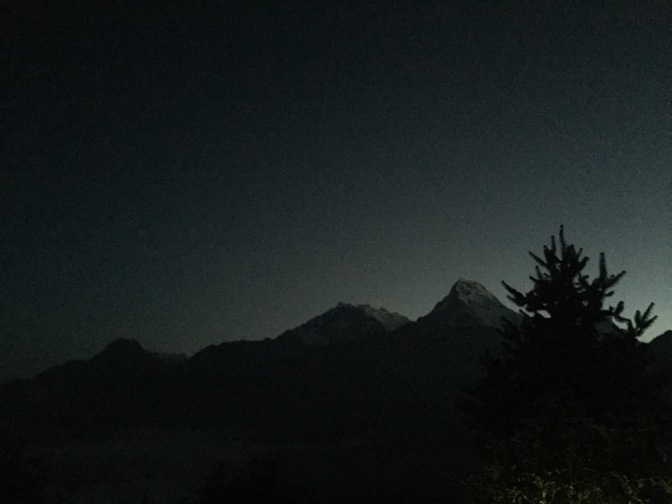 I am not doing so well in the altitude, despite having had the night to acclimatise, and even though 3210m is neither exceedingly high nor new to me. The steps we ascend are flat but steep, and within five minutes my head is pounding. I drag every inhale, trying to pull thinning air into aching lungs, and the air is so cold that every exhale is a cloud of frosty vapour. Still, we try to maintain a steady pace. Sunrise is less than an hour away. 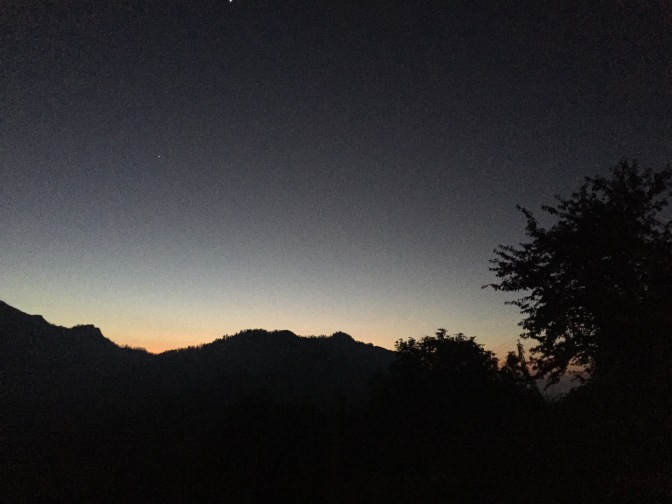 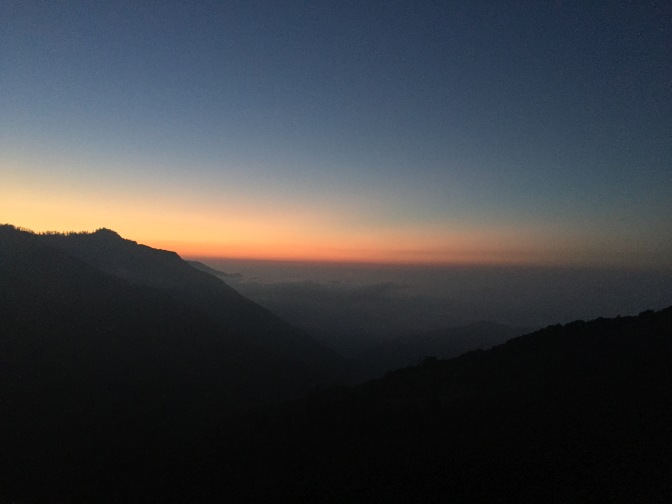 Despite our best efforts, the first rays of light peek through the clouds when we are barely halfway up, revealing the mountain ranges that surround us and the misty blanket of clouds that waft around them. The sky lightens from black to dark blue, and then blends into the slightest hint of orange, and we cannot help but stop to take pictures, before Delhi ushers us back on the trail.

Time passes slowly on a climb. I keep thinking we are almost there but each time we stop for a breather I learn that the summit is still a reasonable distance away. These are literally breathers – for our hearts to slow down enough to carry on, for our lungs to expand with enough oxygen to fuel the rest of the climb. 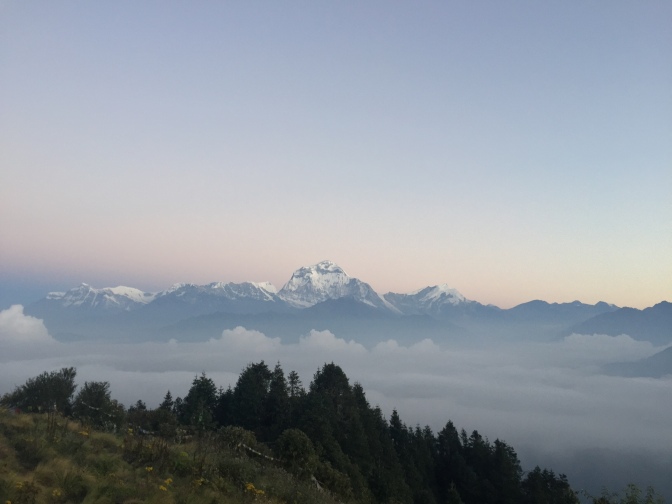 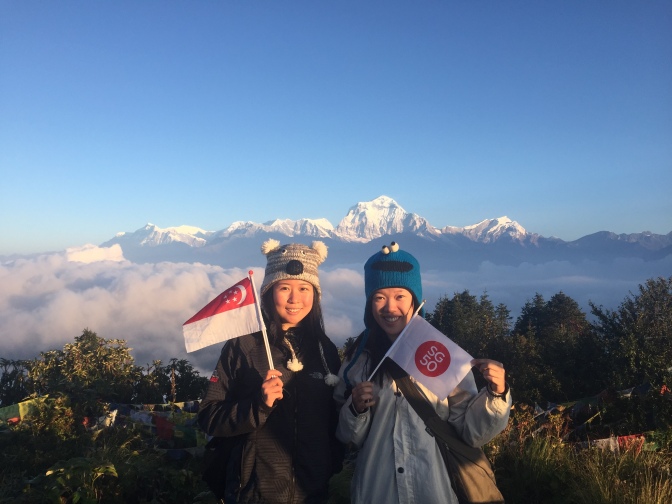 We reach the top just as the sky brightens, looking down at wispy clouds that change from dark blue to marshmallow pink, and then to the light blue that will last through the day. Behind them the first rays of sun glint off towering peaks, all the mountains I first saw on the flight into Pokhara.

It is challenging but not impossible to get a shot of the mountains, without any stray heads in the corners, or tourists wandering into my shot. I estimate eighty to a hundred people on the peak, and Delhi says that if not for the 7.8 magnitude Nepal earthquake that made international headlines in April there would be about 500-600 people here. I recall my visits to other tourist sites in Asia – Borobudur and Prambanan temples into Yogyakarta, Angkor Wat in Siem Reap – and having experienced the relentless crowds at those sites I am glad we decided to come to Nepal now.

Later, after a triumphant breakfast at the teahouse, we start the long trek to Tadapani, where we will next spend the night. When we arrive we will be past the halfway mark of the trek, and I have promised myself a bowl of Korean instant noodles for dinner as a reward. But the road there is a long one – up another peak next to Poon Hill, and then down long flights of concrete stairs that are easier on the heart and lungs, but much tougher on the knees. We descend slowly, leaning our weight into our walking sticks when the steps get too steep, and I learn that muscle memory has kicked in. It is more second nature now, compared to the days before, figuring out where to step and where to plant my walking stick and what is the fastest and safest way down.

Tomorrow various muscles that have not worked in years will scream at the simplest of tasks – getting out of bed, climbing downstairs to the bathroom, descending the gentlest of slopes. But for now this downhill route is welcome, and it takes us to Tadapani just as a light drizzle descends on the day, and a rolling mist starts to obscure the mountains. By now we have gotten used to the rudimentary accommodation on the trek, and washing my hair with a scoop and a bucket isn’t so bad – at least the water is lukewarm. 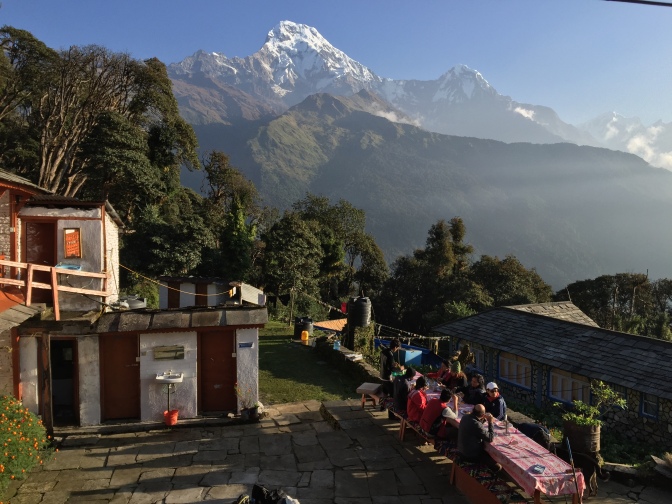 There is wifi in the warm communal dining room, which is surrounded by clear windows where we watch the last rays of light dip behind the mountains. I bring my journal and my phone. This has become one of my favourite parts of the day – to be clean and comfortable, connected to home, and free to reflect on the day’s thoughts. Most of the other trekkers in the room are Westerners en route to Everest Base Camp, a roomful of people checking in with loved ones. There is a man who won’t tell his wife about the nasty gash on his leg, and another who just wants to tell his family that he’s alive. There is a couple in their forties cuddled up to each other, smug and whispering as they survey the wifi party: “I’m glad we don’t have to do any of that.”

From Tadapani onwards we can afford a much slower pace for our trek – just three hours to Ghandruk, the last village and tea house. We start later than usual, at nine in the morning, and while I am finishing up breakfast a pack of donkeys clomps into our courtyard. They are laden with goods for a delivery, and while they wait for their packs to be unloaded they nibble on flowers until the owner runs out and shoos them from her flowerbeds.

Although today’s trek will be the shortest, it is also the most painful. Five days worth of lactic acid have accumulated in our muscles calves and quads, and it makes the trail harder to navigate. At one point Shuhui slips while crossing a stream; on a narrow dirt trail facing a steep drop off a cliff I lose my footing and it is only Binod’s quick reaction catching my arm in time that prevents me from falling into canopies below. 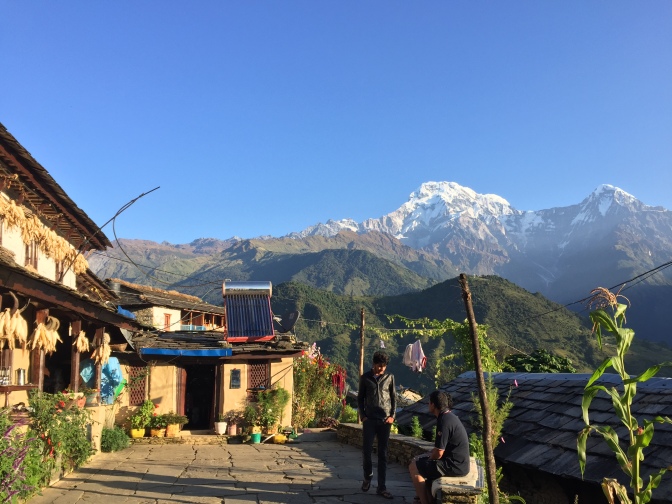 After that, we go slow. So slow, in fact, that by the time we reach Ghandruk, Delhi has an alternative suggestion for the last leg of our trek. On day five we are meant to trek five hours back to Nayapul for the pickup that will take us back to Pokhara, but if we want, we can walk for an hour a small village instead and catch a jeep or public bus back to the city. The ride will cost us each about 30SGD, but we are so spent that we leap at the opportunity.

We are so spent the next day that when we see the green public bus that marks the end of our trek, there is no elation, only relief. We did it! And now we can return to our creature comforts of wifi and clean clothes and warm showers.

I didn’t come to Nepal intending to climb Poon Hill. Prior to this I’d only camped once, for a night, in China; five days of walking sounded like an intimidatingly long time. But everyone said the view would be worth it – friends who recommended the trek back home, locals we met in Kathmandu, other trekkers we met on the way to the peak.

I agree with all of them. Every step – some lighthearted, many painful – was worth it, not just for the view at the top but because we test our limits one adventure at a time. The next time someone suggests a trek, perhaps I’ll approach the idea with less apprehension. Maybe midway through I’ll chastise my former self again; maybe I’ll think about stopping; maybe I’ll continue because there is only one route back to civilisation. But at least I’ll go. And wouldn’t that make this adventure worthwhile?